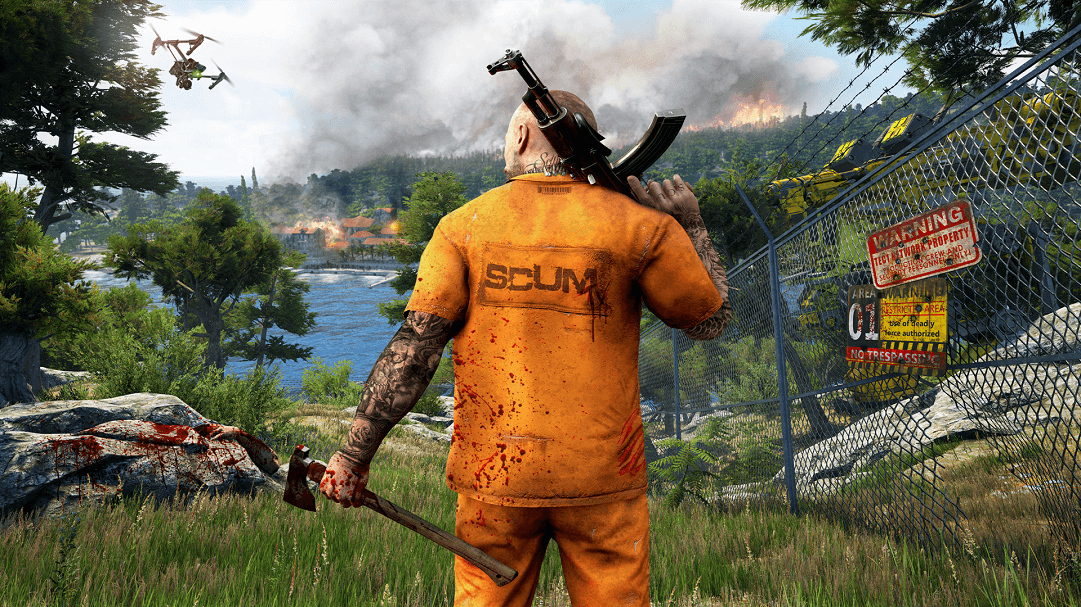 – SCUM- Next generation, story driven survival game featuring extremely complex game mechanics and unrevealed survival features. We are an experienced team oriented towards innovation and perfection in game production and have decided to develop SCUM side by side in collaboration with its community with the goal of making the best possible survival game yet.”

The world’s unquenchable need for entertainment has turned towards bloodlust as entertainment behemoth TEC1 is set to premiere season two of its television sensation SCUM. This new season moves the contest from the rugged, enclosed indoor arenas to the lush forests, rolling fields, and rugged terrains of TEC1’’s own private SCUM Island. Both fan favorites and new prisoners will clash in a ruthless war of survival while battling for the support of viewers, producers, and corporate sponsors for fame, gifts, and a chance of life after death.

SCUM aims to evolve the multiplayer open world survival game with unprecedented levels of character customization, control and progression, where knowledge and skills are the ultimate weapons for long-term survival. Combining the methodical planning and management of hardcore survival with optional PvP ‘network events’ available to everyone at anytime, SCUM strikes a unique balance between complex simulation and intense action in the next generation of survival game.

SCUM is built with Unreal Engine 4 and will expand throughout the Early Access period. Fans can follow details on development with weekly dev blogs on scumgame.com and on Twitter @SCUMgame.

Complex Simulation: SCUM utilizes dozens of complex systems to allow players to go as deep as they choose into the management of their character. Players can delve into the minutia of the survival experience through systems controlling their character’s metabolism, inertia during movement, and even how fast layers of clothing dry on and off the body. The devil is in the details…

Traverse and explore 144 sq km of terrain that includes dense forests, picturesque beaches, serene fields, abandoned towns, and rundown airfields. Initially, the massive terrain will be handled by foot and as development continues vehicles will be introduced for quicker movement.

Enter TEC1’s ongoing network events with a click of a button and be whisked to enclosed areas of the island for white-knuckle PvP gameplay. Volunteer for an event and be pitted against other prisoners with fame points and high value loot on the line for those that survive.

While the current version of SCUM already includes basic crafting, combat, and customization systems, the featureset and gameplay will continually expand to include more advanced mechanics, more variety in gameplay, and a metanarrative for players to complete missions with hopes of one day getting off the island…

Survive with up to 64 players per server with the option to rent your own server right from the in-game menu.

The developers describe the content like this:
Frequent violence and gore based on user action during gameplay. Full frontal nudity during character creation and gameplay based on user selections.